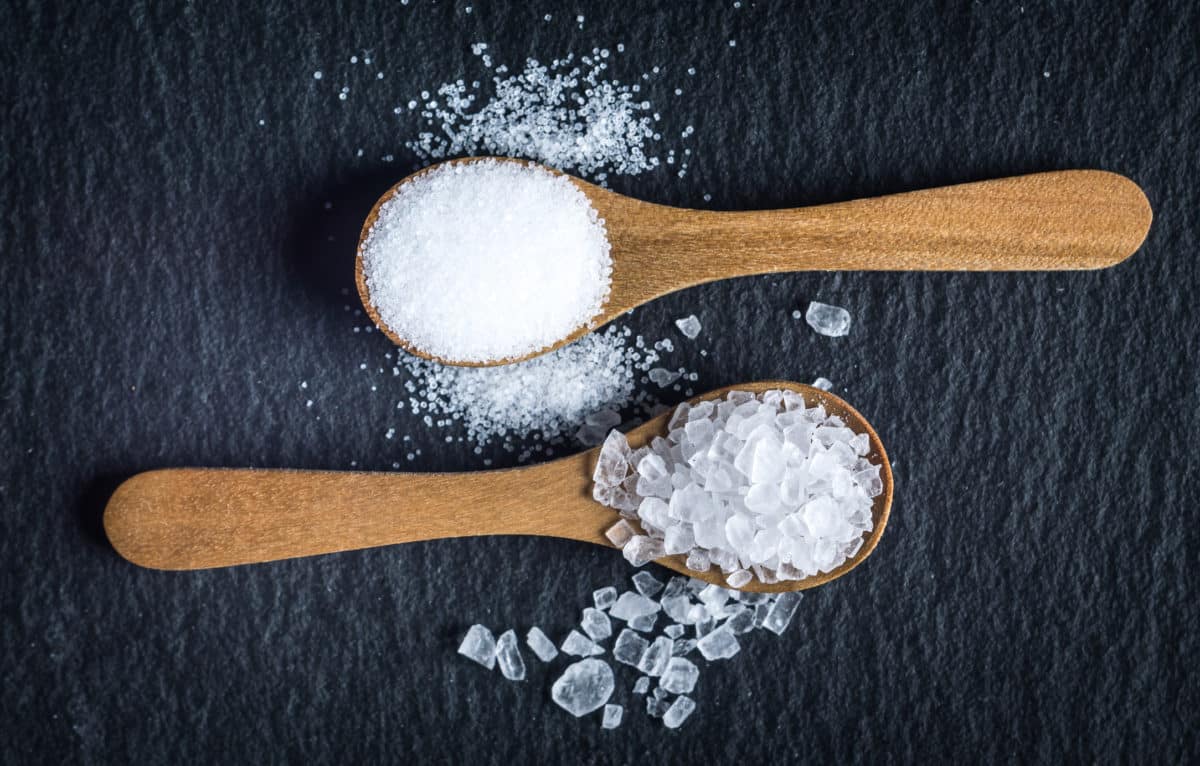 We hate to break it to you, but if you’re like most Americans, it’s time to put down the salt shaker. That’s right: According to the 2015-2020 Dietary Guidelines for Americans (DGA), the average American is consuming more than 3,400 milligrams (mg) of sodium a day–that’s more than 1,000 mg over the recommended upper limit of 2,300. To put this in perspective, 2,300 mg of sodium is the equivalent of just one teaspoon of table salt. Considering that excess sodium consumption can put you at risk for serious medical conditions like high blood pressure, heart disease and even stroke, it’s a good idea to start cutting back. Easier said than done, considering sodium finds its way into even the most unsuspecting foods, right? Don’t sweat it. With a few simple strategies, you can easily reduce your sodium intake. Here are our top tips for cutting back on sodium:

Heat and eat meals might seem like a great idea–they’re convenient, they’re tasty and they’re the perfect size for solo diners. But unfortunately, many of these pre-made meals come loaded with sodium and preservatives. In fact, 70 percent of the excess salt in Americans’ diets comes from eating these processed foods and restaurant meals, according to the 2015-2020 DGA. They’re okay in a pinch, but if you’re trying to shake your salt habit, try to keep processed foods to a minimum. Instead, consider using a slow cooker to create veggie-packed soups and chilis (using low sodium broth, of course!), packing them up into individual servings for the week and popping them in the microwave as you need them. Or purchase frozen veggies that can be quickly cooked in the microwave and add your own sauce and protein. Doing this will give you the convenience you’re after while also allowing you to control the amount of salt you add to your meals.

Opt for Fresh or Frozen Veggies and Dried Beans

You’ve been told to eat your veggies since you were a child–and with good reason. They’re packed with fiber, antioxidants and a whole host of body-boosting nutrients. Plus, they’re naturally low in sodium, calories, fat and cholesterol. Beans are also great additions to your diet since they deliver fiber, iron and even protein. But since canned versions of both foods tend to contain added sodium, it’s always a good idea to opt for fresh veggies or dried beans and cook them yourself instead. Helpful tip: Make a big batch of beans every Sunday so you have them on hand all week to add to soups, salads, tacos and grains. Frozen veggies can be just as nutritious as the fresh options but be careful: Many frozen varieties come with pre-made sauces that tend to be loaded with fat, calories and sodium. Purchase them plain and add your own sauces and seasonings to keep the added salt to a minimum.

If you do purchase canned veggies or beans, opt for no salt added varieties when possible. In cases where that isn’t an option, make sure to pour the can’s contents into a strainer, drain the liquids, then rinse thoroughly with water before adding them to your meals. This will help remove some of the excess salt.

The amount of sodium in your ketchup may surprise you–just one tablespoon dishes out nearly 200 milligrams. Other flavor enhancers like mustard, many salad dressings, relish, soy sauce, stir fry sauce, hot sauce, and even pasta and barbecue sauces also tend to be concentrated sources of sodium. And don’t forget about pickles and olives, which pack a pretty serious salt punch. Do yourself a favor and opt for low sodium versions of these add-ons when possible. And go extra light on those that don’t have a lower sodium option.

You probably wouldn’t add a product to your shopping cart without first comparing its price to another brand’s version, right? Use that same strategy when food shopping. Compare the nutrition labels on similar items to determine which will keep your sodium intake lowest. If you’re shopping for bread, check a few different brands to determine their sodium count–one slice can dish out anywhere from 80 to 230 mg, depending upon the brand and kind. If it’s breakfast cereal on your list, be sure to compare labels as well since they can include anywhere from 150 to 300 mg. Just be sure to check that the labels refer to identical serving sizes–if one label is providing the sodium count for one teaspoon and another is basing it on a tablespoon, you’ll want to multiply the first number by three since there are three teaspoons in a tablespoon to get an accurate read on the sodium content.

Season with Spices and Herbs

Who said salt was the only way to flavor your food? There are so many great seasonings that work wonders when paired with specific foods. Rosemary is great on potato-based foods, chili powder, cumin and paprika add a little flair to bean-based dishes, cinnamon and nutmeg add sweetness to oatmeal and even coffee, and basil and oregano pump up the flavor of tomato sauces. Next time you’re inclined to reach for the salt shaker, try experimenting with a new spice or herb instead. You–and your taste buds–might be pleasantly surprised.

Don’t Salt It Until You Try It

Many of us tend to season our food before we’ve even tasted it. This can lead to over-salting. Try dishing out your food, tasting it and then salting as needed, adding just a sprinkle at a time. And pay attention to how much salt you’re adding. You may even want to start by measuring the salt you’re adding to be sure you’re not overdoing it–start with a quarter of a teaspoon and go from there.

You’re probably not surprised to hear that many snack foods are jam-packed with salt. Choosing low sodium versions of these foods is a great move, as is swapping in healthier alternatives. For example, if it’s a crunchy snack you’re after, ditch the hard pretzels and potato chips and opt for crunchy carrot sticks or cucumber slices instead. You can even make your own veggie chips and fries–just slice up your veggies of choice, toss them in some olive oil and black pepper, then bake them in the oven at 325 degrees until they achieve the desired crunchiness. If you like noshing on nuts through the day, good for you! They’re loaded with healthy fats and contain protein, which will help keep you satisfied. Just make sure to buy the unsalted varieties–or at least the lower salt options. Otherwise, that sodium count will creep up fast. Be Aware of Sneaky Sources Condiments aren’t the only unexpected sources of sodium. According to the Centers for Disease Control and Prevention (CDC), the majority of Americans’ daily sodium intake comes from grains and meat. Other culprits? Processed poultry, soups and sandwiches. Cottage cheese is another big offender. By opting for lower-sodium varieties where possible and cutting back a bit on those that don’t have that option, you’ll drastically minimize your sodium intake.

Go Fresh When Dining Out

Here’s the truth: Restaurant chefs aren’t concerned with your health. They’re only concerned with the flavor of your food! They’re happy to pile on the salty sauces and to pour half the salt shaker on your meal if it means you’ll leave satisfied. To keep your sodium intake low while dining out, your best bet is to opt for fresh salads with dressing on the side. Not in the mood for a salad? No problem. Just request no added salt on whatever meal you do choose and keep the sauces on the side, so you can use a lighter pour.